Do I want SSD or HDD?

Oh hi everyone! Zarte here! I’m just sat around debating with mates whether we should have a Chinese or an Indian tonight, so give me a second please! 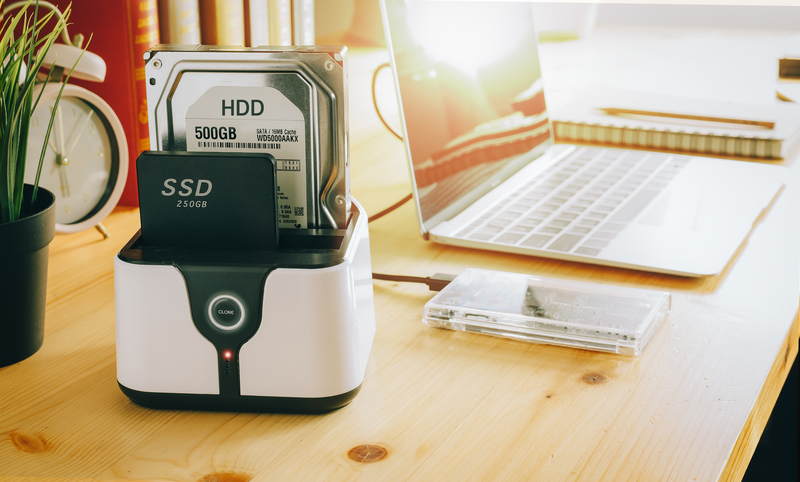 Yes I know there are merits to both… well, we had an Indian last time. That’s true, the Chinese WAS a bit pants last time we went… but James really wants a curry… OK, we don’t need to argu-… OK, I’m just going to write this article and leave you to argue between yourselves..

Yeah, OK, so apparently this decision isn’t all that easy to make. It can be similar with computers sometimes. You have to try and make the best decisions for the components you need, but in reality there are pros and cons in almost every decision you can make.

For instance, the rise of Solid State Drives (SSD) in comparison to Hard Disk Drives (HDD) means there’s now a fairly major decision to be made when it comes to which will most benefit your personal usage. But a lot of our customers don’t really understand the difference. So hopefully this article can help clue you in a bit more.

Put simply, the traditional HDD is made up of various mechanical parts, which makes them larger than SSDs, whilst also having more components which can fail. SSDs on the other hand are flash storage. They use chips to save data, in the same way that you may well be used to with a USB memory stick, or the card in your mobile phone, and require no moving parts at all. They also operate much faster than HDDs because data is able to be read and written to them at much faster rates. On the face of it, this makes SSDs the more attractive option, but there’s much more to consider just this.

In terms of cost, SSDs are considerably more expensive per GB. The price of them has come down substantially in the last few years however, and will continue to do so, but as usual with newer, more compact technology, you will have to pay more for access to it. On the flipside, HDDs are available in much larger capacities, and for a much more affordable amount. This is why a number of computers are beginning to come with the option of having both kinds of drive in the same computer. The advantage of this, is that you can have a SSD for system files needed to boot up the machine, and programs you use most regularly, whilst having a higher capacity HDD for keeping everything else on.

There is also the question of lifespan. At this moment in time, HDDs still have the edge on shelf life. This isn’t to say that your new SSD will implode after a year, simply that HDDs if well looked after, can continue running for quite some time after the average SSD will begin to have issues. Data recovery specialists will also be more likely to be able to retrieve data from an HDD as opposed to an SSD. They tend to become more difficult to write to over time, an issue that HDDs don’t usually face.

As usual with IT, a large part of the decision is what you need to use your PC for, as both have distinct advantages and disadvantages. In my opinion, the previously mentioned option of having both within the same machine is actually a pretty sensible one, and will allow you to have the benefit of mass, reliable storage, whilst having a computer that can run your essential requirements in next to no time at all. If you don't have huge amounts of data to keep though, an SSD alone could actually be quite sufficient. Hopefully this has helped outline one point you'll need to consider the next time you're purchasing a new computer, but as usual, these articles are only designed as a crash course in the subject. As such, should you need some additional advice or help applying this advice to your specific situation, then you’re absolutely welcome to get in touch. You can do this via our Social Media (Facebook, or @BEASolutions on Twitter), via the form on our contact page, or perhaps by giving us a call on 023 9298 8855.

Now, time to see whether they’ve stopped squabbling over dinner yet… wish me luck!